Port Saint-Goustan, part of the village of Auray, sits on the Auray River, also known as the Rivière du Loc'h, in the Brittany region of France. The town has long been a trading center due to its position as the last town along the navigable section of the river. Ships would travel from Britain and Spain along France's Atlantic coast and up the Auray River to trade wine, salt, leather, iron and steel produced for wheat, rye, oats, butter, meat, fish, cloth and fabric from the region.
The port, on the east side of the river, is connected to Auray, on the west side, by a stone bridge. It is not known when the first bridge was built at this location, but a document from 1464 refers to the current bridge as the "Pont Neuf" ("New Bridge"). A small customs house built into the east end of the bridge was used to collect taxes on items passing through the port and over the bridge.
Who Was Saint Goustan?
The port is named after Saint Goustan, the patron saint of fisherman and sailors. Goustan was born in 974 in Brittany and was kidnapped by pirates when he was 18 years old. At one point, he was wounded and the pirates abandoned him on a deserted island where was saved by a hermit, Saint Felix, converted to Christianity, and himself became a monk.
According to the legend, Goustan was wounded and hungry on his deserted island but after days of fishing he only managed to catch one fish. To conserve his food, he only ate one small piece each day but each morning, his fish was miraculously pieced together and Goustan survived. He became a monk in 1025 and died in 1040.
The Auray Castle 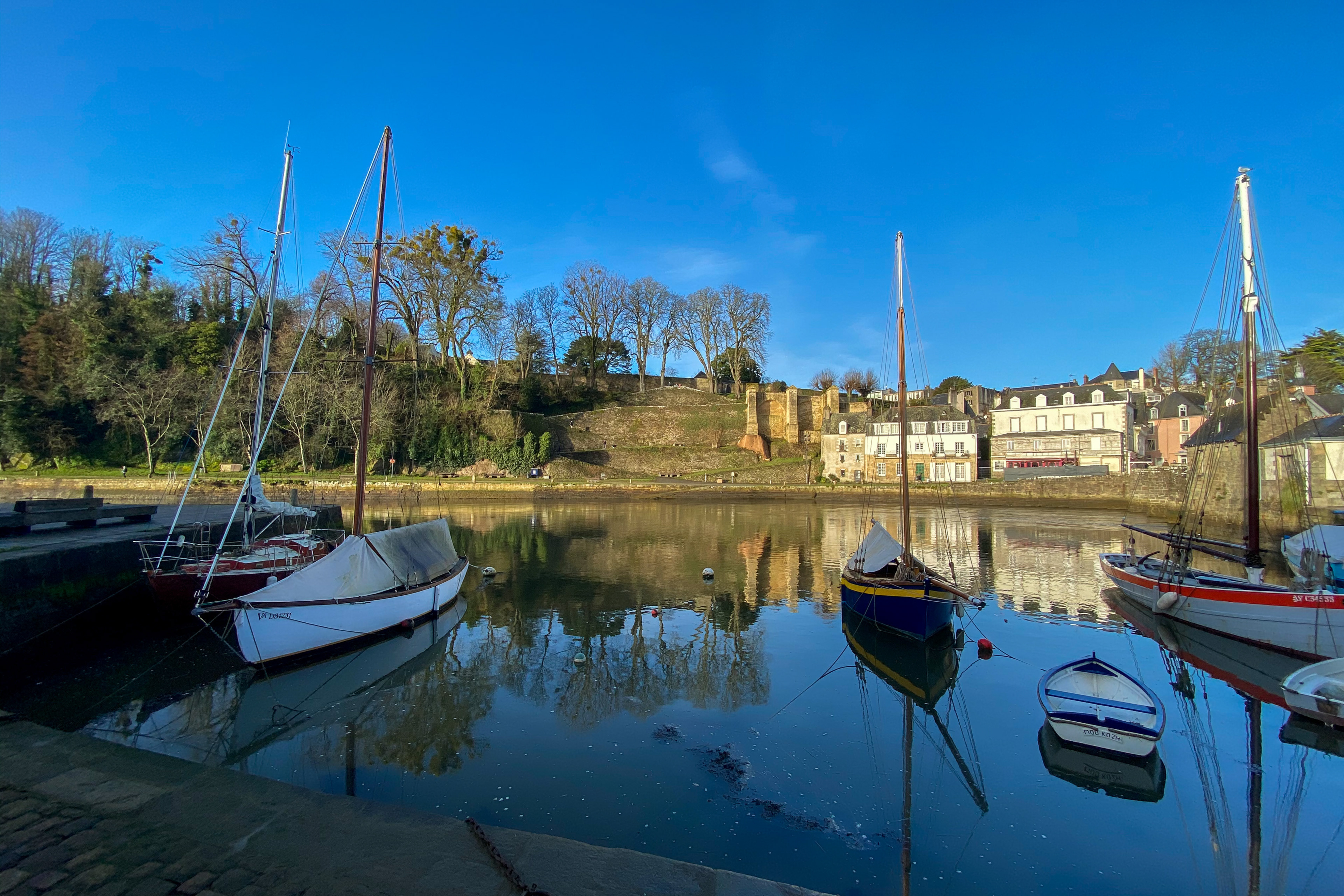 The Port of Saint-Goustan was built on the opposite shore of the river from the site of the ancient Auray Castle. It is unclear when the first castle was built on the site, but records from 1096 indicate that a castle stood on the hilltop overlooking the port area. It was occupied by numerous rulers over the centuries and by 1546 it had fallen into ruins. King Francis I ordered the castle destroyed but left the stone walls and ramps leading from the river to the castle intact. These ramparts, seen in the center of the photo above, remain today and offer a great view of the port across the river.
The Wharf 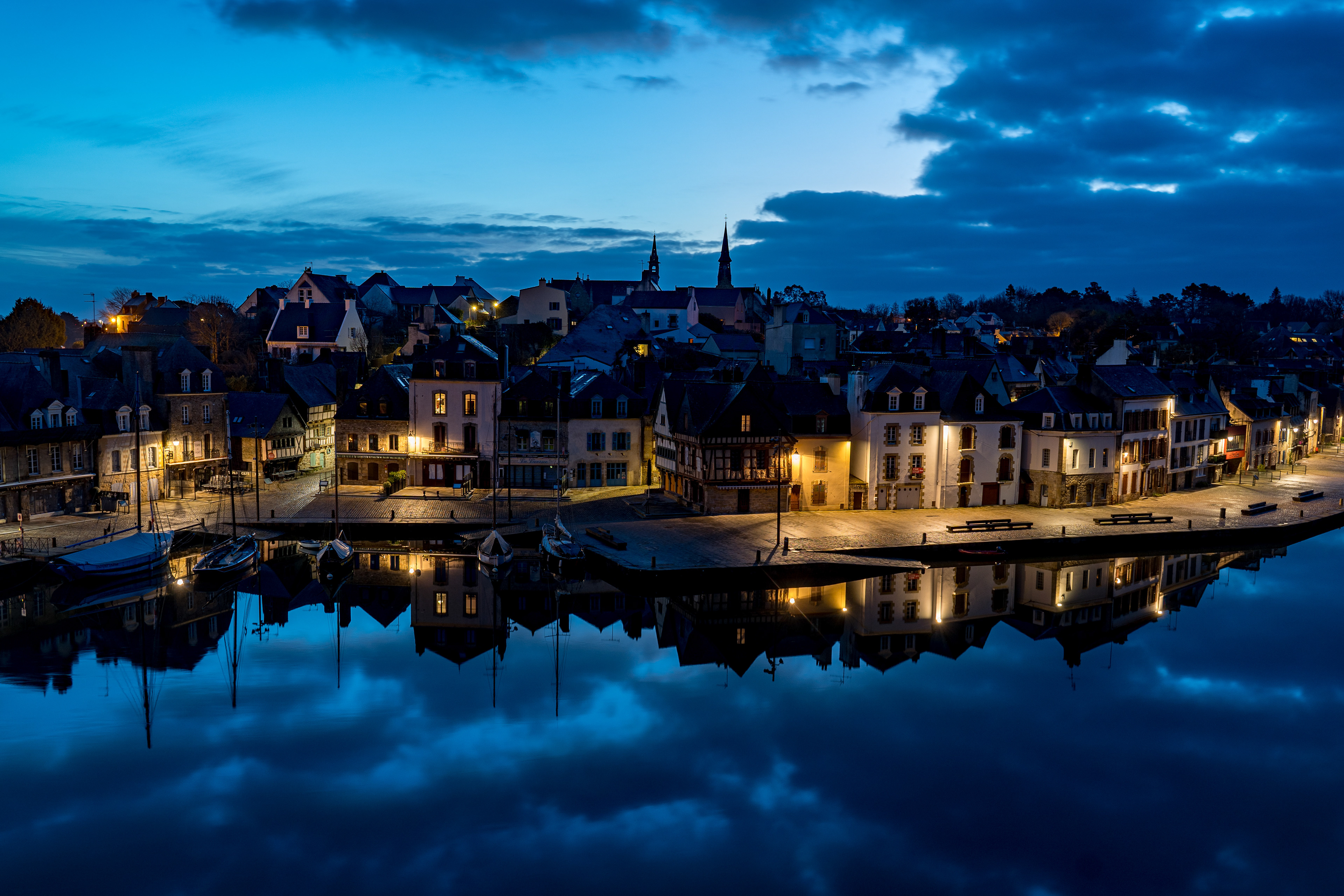 The port area was originally a marshy section of shoreline where boats loaded and unloaded directly to the ground or to floating pontoons. In the 1600s the town began a program to build a stone wharf ("quai" in French) which gradually expanded downriver from the bridge toward the Gulf of Morbihan.
The river in this area is strongly affected by the tides (as seen by comparing the photo above with the one at the top of the page) and a series of stone ramps were built, allowing ships to be loaded and unloaded no matter what the water level.
The construction of the Port de Lorient in 1655, the lack of roads connecting the port to the rest of France, and the arrival of the railroad in the 19th century reduced the importance of the port as a commercial center. Currently, the port is home to over 150 pleasure boats and is visited by more than 1,000 boats each year.
Ben Franklin in Auray 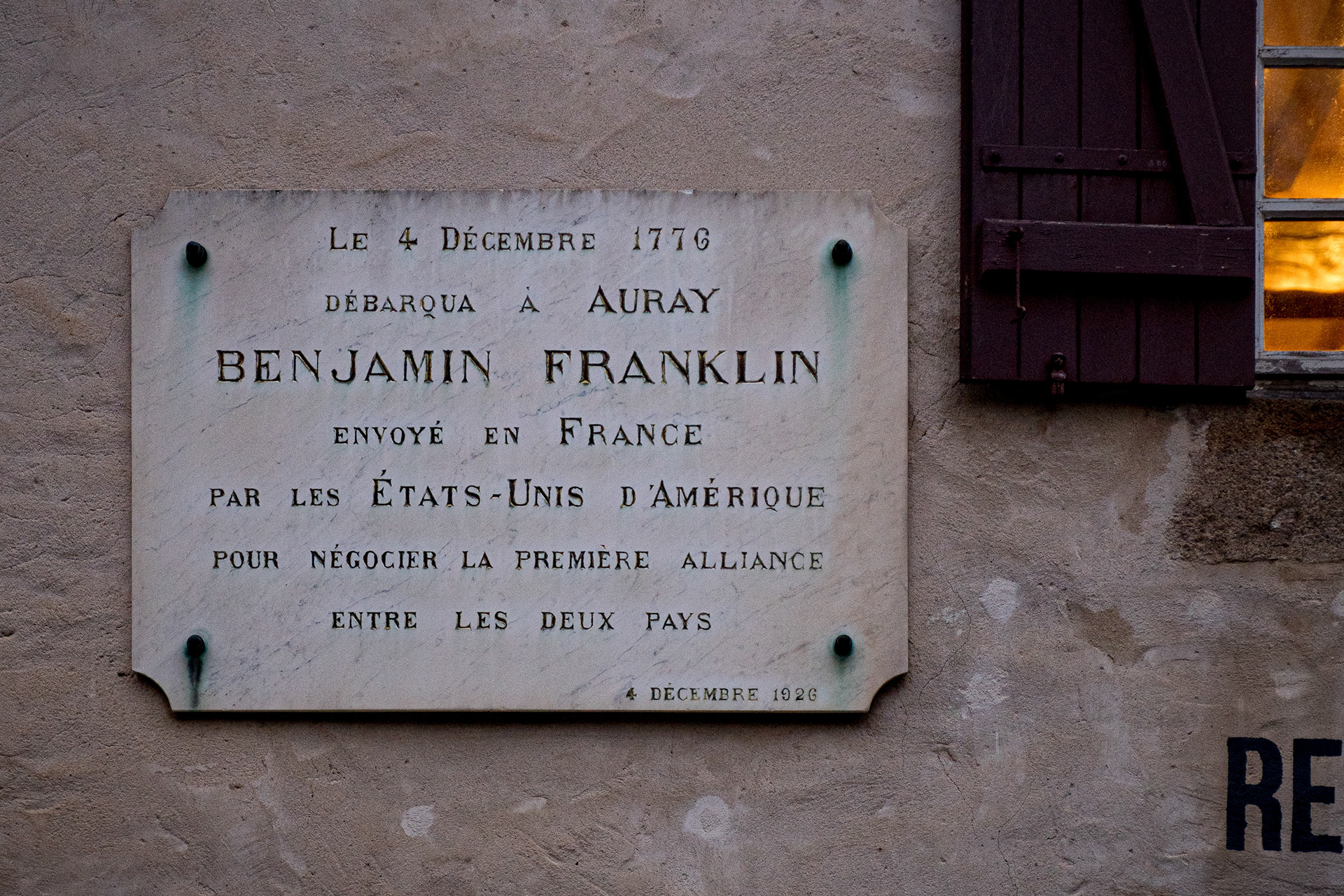 On December 4, 1776, Benjamin Franklin disembarked from his ship in the Port of Saint-Goustan. Franklin then traveled by road to Paris to meet with the French King, Louis XVI to ask for military assistance for the fight against the British. This successful mission lead to America's longest-running alliance. The wharf is now named Franklin Quai in recognition of this event.
Place Saint-Sauveur 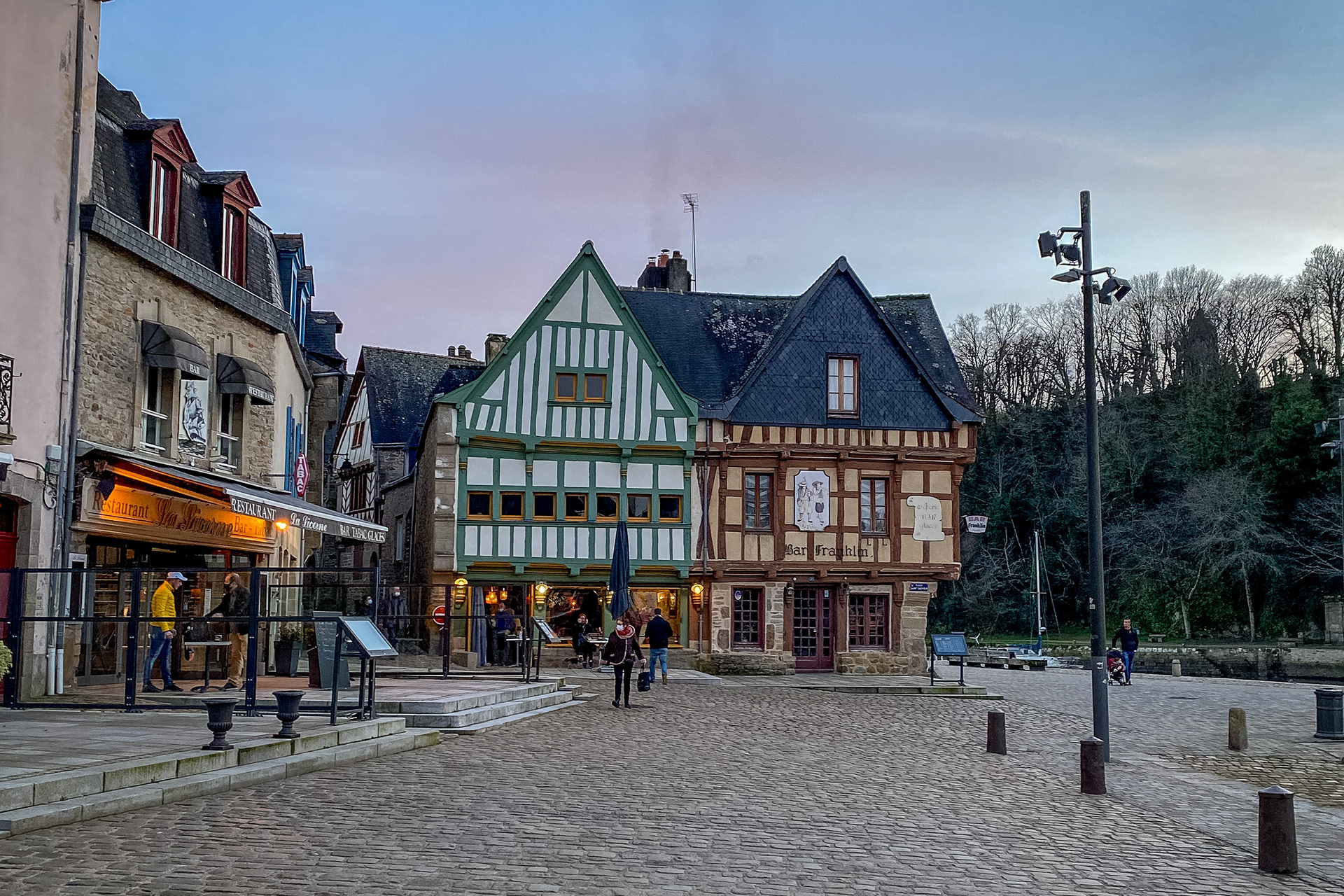 The Place Saint-Sauveur in the Port of Saint-Goustan is lined with cafes and restaurants looking out over the water. The hills to the east of the square are filled with half-timbered houses, some dating from the 15th century, and the Saint-Goustan church. Originally catering to sailors and dockworkers, the cafes and restaurants in the area now serve tourists and local residents.
More Info
https://nominis.cef.fr/contenus/saint/5391/Saint-Gulstan-ou-Goustan.html
https://en.wikipedia.org/wiki/Saint-Goustan
https://www.auray.fr/Ma-ville/Histoire